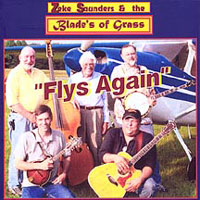 ZEKE SAUNDERS (AND THE BLADES OF GRASS)