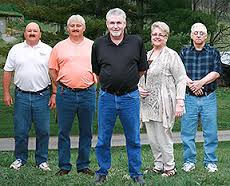 EBBY JEWELL AND THE BLUEGRASS KINSMEN