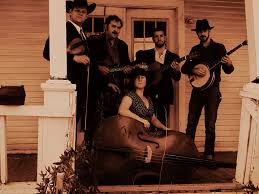 JOHNNY CAMPBELL AND THE BLUEGRASS DRIFTERS